Auricular medicine is an extra-academic medicine accepted and acknowledged by the World Health Organisation. It is based on reflexology and provides a new arterial response of the Autonomous Nervous System, called VAS (Vascular Autonomic Signal). It consists of an increased perception of arterial pulse in tone and intensity. This medicine is based on vegetative nervous conection. 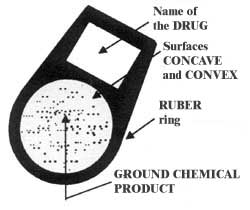 FILTER, material used in Auricular medicine, is made up of a rubber ring with two plastic surfaces, concave and convex, inside of which is the drug to be tested, with the excipient and active substance previously ground.
This utensil is neuter to the VAS reflex arc. When near the skin, the chemical substance inside the filter provoques an inflammation and stimulates the light photones passing through it; this experience indicates sensitivity to the product and causes VAS in the patient’s pulse.

DETERMINING WHETHER A DRUG IS EFFECTIVE, ANODINE, TOXIC OR CAUSES ALLERGIC REACTION.

Being able to predict, with the aid of VAS, if a drug inside a filter is going to be effective, toxic or anodine before even prescribing it to our patients is an enormous progress, which we present in the book. This goal can be achieved in everyday medical practice, in a patient’s home, the outpatient’s departments, or in hospital through the use of:

THE POLARIZING MIRROR is made up of a rectangular mirror to which a polaroid filter of its same size is adhered. When the mirror is placed near the pre-frontal region, cyclop’s eye, different VAS responses are obtained, depending on whether the direction of the polirizing filter is longitudinal or transversal to the body axis. It shows the activity of the test drug filter which had been applied over the epidermis on one of the patient’s arms. Any time this procedure is repeated it produces this phenomenon, which is regarded as scientific proof, in a similar way.

The object of «Auricular Medicine and Psychiatry» is to show new ways that contribute to solve diagnose and therapy problems currently found in psychiatric practice.

Auricular Medicine has several applications in Neurology: migraines (ruling out expansive intracraneal processes), cervicobraquial syndrome, lumbar-sciatic pain, vertigo… Regarding craneo-encephalic traumas, the book describes techniques and equipment to apply polarizing magnetotherapy, as it is an effective painkiller, anti-inflammatory and anti-dematose; provides relief for frequent accompanying symptoms such as cephalic hematoma, and edema, improving patient condition and diminishing some of the effects of concussion. 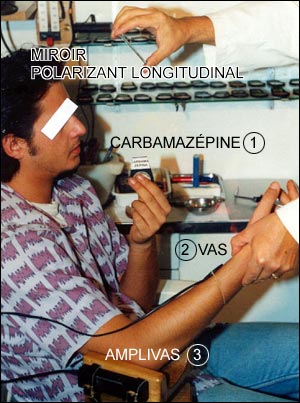 The book contains a chapter dedicated to elective treatment of epilepsy with Auricular Medicine techniques perceived through VAS reflex. It shows which is the appropriate antiepileptic drug to prescribe, taking into account each patient’s specificity against a particular anti-elective chemical substance; quality of drug prevails over quantity or dosage established in plasma levels.

The doctor places a polarizing mirror, longitudinal axis, near the patient’s forehead forehead and detects VAS in pulse when the patient, with epyleptic symptoms, comes into contact with carbamazepine.

Through Auricular Medicine and VAS perception in pulse, this chapter presents a theory to perform magnetotherapy to treat certain mental illnesses. The transcraneal magnetotherapy produces biochemical alterations in the neurotransmition. This method, described by the author, is based on principles of thermodynamics and quantum mechanics. It can be used for local treatment over cerebral hemispheres, with polarizing magnetic fields (north or south polarity) and left or right direction. The key advantage is that it is harmless, as it does not require anaesthesia, oxygen, muscle relaxation, nor convulsion monitoring.

There is a close link between both disciplines. Auricular medicine, through VAS, allows better psychiatric diagnosis and applying appropriate psychopharmaceutical treatment.

Aminergic neurotransmitter substances liberated in the nervous system act in transmission and processing of information are: serotonin (5HT), dopamine (DA) and noradrenaline (NA). These products are included in filters to be tested on the patient before prescribing treatment..

In the book the author describes a method which is the result of two decades of clinical experience and has been checked with statistics.
When taking pulse and placing a neurotransmitter filter near the outer ear, normal patients produce several VAS reflexes. This phenomenon is found in all normal patients and indicates good nervous transmission.
On the other hand, when taking pulse and placing near the outer ear isolated neurotransmitter filters (5HT), (DA) and (NA), depressive patients fail to deliver VAS reflexes to one or several of these filters. This simple procedure shows which are the deficitary neurotransmitters in each pathology. They are identical and repeated phenomena, regarded as scientific proof.

It consists of a filter panel, with crushed antidepressants selected according to their pharmaceutical dynamics, classified into serotoninergic, dopaminergic, and noradrenergic.

For each depressive patient, it allows to know which timoleptic drug is most advisable: serotoninergic, dopaminergic, and/or noradrenergic, according to the deficit neurotransmitter type; previously determined through the VAS reflex procedure described in Auricular Medicine. It is effective in Resistant Depression to Treatment (DRT)

CHOSING THE APPROPRIATE TIMOLEPTIC DRUG FOR DEPRESSIVE PATIENT WITH FLUOXETINE

Left image. When placing the serotonin filter near the outer ear, the depressive patient fails to produce VAS: this indicates serotoninergic deficit. Right image. However, when fluoxetine (the appropriate serotonin antidepressant in this case) comes into contact with the patient’s left hand, VAS are produced. (“Hidden VAS” due to fluoxetine filter cover). Result is checked (not shown). Fluoxetine is still pinned to patient’s left hand and serotonin is again put near the outer ear. VAS persists as the patient is protected by the drug, which shows this timoleptic is effective for her. The procedure ends with identical results every time.

Auricular Medicine can be applied to any and all psychiatric illnesses; this subject is dealt in one of the chapters in the book.